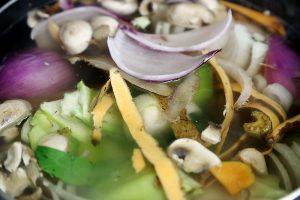 Directions: Chop everything in smaller pieces and fill a huge pot with water. Bring it to a boil, then turn it to medium low (3-4) and gently simmer for two or three hours.

Yesterday, I made a huge batch of fries and because I peeled the skin off, I had almost a big bowl of potato and sweet potato skin. I also wanted to make something with vegetable broth today and found that I have none, so what perfect way to use up those scraps than to make it into a broth?

I then went scrounging around the kitchen for more things as I thought vegetable broth always tasted better with a variety. I found some old, half onions that I had left in the fridge for a while which I had forgotten, half a giant carrot that was also left from everything, so I put those in.

Then I had another idea, you can totally cut the stalks from cabbage (which you usually wouldn’t eat) and the giant hard leaves and stalks from cauliflower/broccoflower, as most times we throw those away as well. So there I go, cutting those up.

Now, I’ve boiled a giant batch of broth from nothing but stuff I would probably have thrown away (or forgot about). What a brilliant way to not waste food. If you have leftovers, I totally recommend that you try doing that.

Visit http://blenderreviews.us to read reviews and comparisons on different types of blenders to see which suits you best! I absolutely CANNOT stress the need of a good blender. Unfortunately, the good ones come in high prices, but I am going to tell you that it’s worth every freaking cent, because what you will get out…

Alternate Names: Goujizi, wolfberry, Lycium barbarum, gou qi zi, Fructus lycii Goji berries are a bright orange-red berry that grows on shrubs native to China and have been a part of Chinese Medicine for over 2000-5000 years! It all started with a Legend from Tang Dynasty that there was a Buddhist Temple known as the…

As a crazy baker, I need flours. Yes, more flours makes me happy! Since I realised just how little nutrition white flours are, I’ve been stepping away from that and finding my way into the wonderful world of whole flours, and I want to share some of my favourite flours I like to bake with….

Unfortunately, often if you want to bake healthy, it can be difficult as many things are unavailable in the local supermarket. I’ve just bought 5 items yesterday on Amazon that I want to share the links to, and give you an insight to what they are. Brown Rice Syrup Buy on Amazon Instead of using…