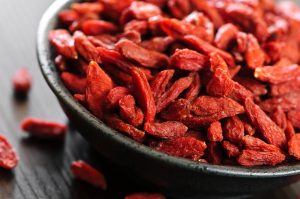 Goji berries are a bright orange-red berry that grows on shrubs native to China and have been a part of Chinese Medicine for over 2000-5000 years! It all started with a Legend from Tang Dynasty that there was a Buddhist Temple known as the Fountain of Youth, and those who drank from the fountain had radiant health, glowing skin and even the old people looked not so old anymore. Usually, goji berries are eaten dried, and they look somewhat similar to a raisin.

The Health Benefits of Goji Berries

The richness of antioxidants, particularly beta carotene, carotenoids and zeaxanthin found in goji berries are particularly beneficial to the eyes by protecting the retina, improving eye sight and possibly even preventing loss of eyesight when people have reached an old age.

Goji berries are able to boost the immune system.

Goji berries are good for balancing the hormonal system. The polysaccharides in these berries are what stimulates the releases of HGH, our master hormone known as the Human Growth Hormone, which could even reverse the effects of aging, therefore making us look as if we’ve drank from the fountain of youth.

Goji berries work wonders in helping us stay alert so we don’t suffer the fatigue and tiredness so many people suffer in such a bustling life. It also helps relieve insomnia and even headaches.

Goji berries are great for weight loss and helps the body stay fit and young.

Goji berries have a number of benefits for different parts of the body, such as protecting the liver and kidneys, as well as improving circulation and strengthening heart, nervous system, bones, skin and tendons.

For centuries, people in Asia who had a generally healthy diet, with the addition of goji berries were seen to have lived longer and healthier lives with few incidences of heart diseases, high blood pressure, strokes, diabetes, cancer, Alzheimers disease, lupus, fibromyalgia, multiple scirosis or other horrifying diseases that has plagued people since the beginning of time.

Legend of the Man who lived 256 Years Old

I first became aware of this berry when I heard about the legendary man who lived 256 years old, Li Ching-Yuen. Sure, there are no ways to absolutely confirm that he really lived this long, but who’s to say his secrets wouldn’t enhance our lives in some ways? One of Li Ching-Yeun’s secrets was that he ate goji berries everyday. Of course, that doesn’t mean if we ate a giant pot of them a day, we’d suddenly live for 250 years. It’s important that we eat this, along with forming other healthy habits, such as exercising and eating well, to promote our overall health.

How to add Goji Berries in our Diet?

It’s not that hard to come up with different ways to add goji berries in our diet yourself. In case you’re having trouble, here are my suggested methods –

Brew Goji Berries Tea – Add about 10-15 berries in a cup of boiling water along with red dates. If the hot water isn’t enough, then brew goji berries with water in a pot and drink it as tea.

Eat them Dry – You can sometimes find edible goji berries in health shops. (I say edible because the ones in grocery stores may not be suitable just to eat like this, it may have certain chemicals or bacteria, and need to be cooked first.)

Cereal or Nuts Trail Mix – Add them to your cereal or nuts trail, they’re about the same as dates!

Cook them in Soups – If you’re making soups, throw in some goji berries and see how that tastes. It may enhance the soup and make it taste better!

Blend them in Smoothies – Do you enjoy making banana smoothies or other types of fruit smoothies? Blend these in!

Bake in Breads or Cakes – If raisins can be used for cakes and breads, then so can goji berries. Next time, try baking with goji berries.

Overdose and Side Effects

Although goji berries are non-toxic and generally safe to eat, it’s still not a good idea to overdose on them. The recommended daily amount for maximum benefit is around 15 berries a day. Don’t assume just because they’re healthy, it’s good to eat a packet. Like everything else, when you have too much of something, it can become a bad thing.

Green dough is just an even healthier version of whole wheat flour, and I totally recommend if it you are making noodles, dumpling skins or any other pastry. (Yields: 1 dough, Serving: Many, Prep time: 25 mins) Ingredients 2 cups baby spinach 2 stalks kale 1/4 cup & 6 tablespoons water (divided use*) 2 cups…

“What can we do without a heart? We can’t cook, we can’t clean. In other words, life would be better without a heart!” Oh man, I just had to say that because it’s one of my favourite quotes. I wanted to share 25 heart healthy foods to keep your heart in glowing conditions! Nutrients that…