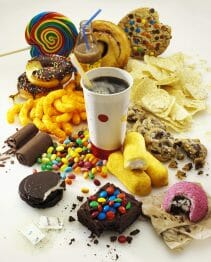 I weigh 46kg at most, and before anyone stares at me green with envy, let me say that I envy those who are actually able to put on some weight, which I’ll explain soon. Most people are so shocked that I could eat all the fatty and sugary junk food but not gain a single pound of weight. My nickname is often “hollow legs” because nobody knows where I put all the food I ate. My husband is always jokingly jealous that I can eat twice as much rice as him but not gain weight, whereas every little thing he eats seem to make him put on an extra pound or three.

Even if you eat the entire world and not gain a pound, does that mean you should eat junk food all the time? No!

Sometimes, I feel as if weight is almost like a protective barrier. Those who gain weight were safer than those who weren’t because at least, the fat had somewhere to go. In 2009, I ate very unhealthy food for an entire month. My mother was away in China and she was usually the one who kept an eye on our food. Her being away was almost treated like a holiday time for us to eat whatever we want. I remember that within a couple of days, I finished a whole pizza, two steaks/lamb chops and bacon and eggs. My body did not like it one bit. I literally felt myself becoming ill.

*I had headaches that lasted days.

*My heart palpitations became so bad I feared going to sleep. I literally felt as if it would fail and I’d die in my sleep one morning.

You could say this was probably my own anxiety or that I’ve got a unique disease or allergy reaction. But I’ve always been able to eat these foods when I regulated myself in the past, so why did it act up now? Why was I fine up until then? Why did this sudden binge eating cause headaches each day? I still remember lying there, feeling as if I needed to be on pain killers for the rest of my life.

My mother had the same problem with heart palpitations and headaches when she was young. She specifically said when she gave up eating two steaks a day, her palpitations stopped. She went on and off two times to test if it’s true, and turned out that meat indeed was causing her palpitations. Though we can’t say what was the exact cause of our heart problems, but one thing is for sure: We were both in good weight conditions. Some people even thought we were underweight and should gain. This clearly showed that even though we were relatively thin, that said nothing about our health conditions.

Why was my reaction to eating too much fatty food more severe? 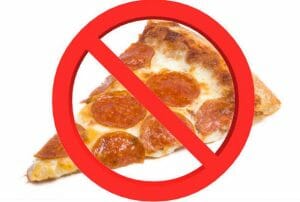 My dad ate the same food as I did, but he didn’t get any of the symptoms. Instead, he just put on some weight.

This got me thinking that just because your body doesn’t gain fat, that does not mean you can eat whatever you want, how often you want. Because I don’t believe the my body is that miraculous at processing all these fats and sugars out so quickly that I could feed on these forever and not let it affect me. If that’s the case, then most of China wouldn’t get heart diseases, since almost the whole population simply don’t become overweight. An example was when I went to Shanghai to shop for clothes, all t-shirts fitted without me even trying them on because they were my size. Also, if people really had the ability to that, there would be all kinds of tests to figure out how to implement that ability to others.

I can’t say the next person will also get headaches and heart palpitations, but I do believe the effects on overeating certain food affects everyone differently. So we cannot simply rely on losing weight to determine our health.

Bottom line: Please don’t assume just because you don’t gain weight, you can eat any food you want without consequences.

Silicone muffin cups Aren’t these just such a wonderful invention? Instead of buying paper muffin cups that you throw away each time, you can bake muffins in these, and it comes out easily, plus you can reuse them! Candy/Chocolate Molds These are amazing, they pop out so easily and you can mold brownies, candy or…

Yesterday, I was on one of those “hunger modes”, as in “I need to eat this instant, this second or I’ll die…” feeling, and it wasn’t very easy to overcome. I didn’t want to eat more fruits because I practically have been having them all day, but didn’t want to eat a second dinner. What…

Miso to Replace Salt Miso is a Japanese type of fermented soybean in the form of a paste, and this is a brilliant replacement for salt, as there are a lot of good nutrients found in miso. The Garlic! I noticed that peeled garlic you can buy at the supermarket tastes better roasted, and unpeeled…

I’m always on the lookout for replacing certain foods with healthier alternatives. Here are five of the latest swaps I’ve been doing! Nuts for Cheese I couldn’t believe just how much ground almonds taste to cheese. I was making pasta the other day and ground up some almonds with water and it became almond milk!…